The COVID-19 pandemic brought immense change to our way of life. The world as we understood it is no more. However, one thing the pandemic did not change, but rather accelerated, was the speed at which technology across industries is evolving. Innovation is no longer seen as an advantage but a necessity. The Accenture Tech Vision 2021 report mentions that "during the pandemic, it became starkly clear that there is no leadership without technology leadership."

According to the Technology Trends Index by research firm McKinsey, there are seven trends that will reshape and disrupt the way companies operate. These trends include next-level process automation, 5G and IoT connectivity, and applied artificial intelligence.

The pandemic has forced whole industries to adopt more digital tools to continue operating remotely. Rapid digital acceleration during the pandemic has cemented technology as the cornerstone of global leadership. “Just enough” is not enough now. The gap between digital leaders and laggards grows by the day.

Using the framework proposed by Everett Rogers in his Diffusion of Innovations Theory, there are five stages in the innovation adoption cycle: Innovators, Early Adopters, Early Majority, Late Majority and Laggards. Whether Mexico is an Innovator, an Early Adopter or a Laggard remains to be seen. But there are many signs that point our country toward the left side of the curve to be an early adopter. Let’s take a look:

Infrastructure is there: In recent days, America Movil’s subsidiary Telcel, Mexico’s biggest mobile network operator, announced the launching of its 5G network that will have an initial phase in 18 cities around the country, with plans to cover a total of 120 cities by the end of the year. Furthermore, Mexico’s Country Commercial Guide by the US Government International Trade Administration states that experts predict that Mexico will have over 77 million e-commerce users by 2025 due to improvements in connectivity, enhanced financial inclusion, streamlined logistics and increased digital literacy.

Financing is there: A boom in investment in 2021 saw Mexico's unicorns grow from 1 in 2020 (Kavak) to eight in 2021 (Bitso, Clip, Konfío, JOKR, Clara, Incode and Merama). According to Bloomberg, “US, European and Asian Investors are turning their focus to Mexico and other countries in Latin America”. Among some factors guiding this investment boom are the restructuring of the supply chain, a change in consumer habits and the need to digitize financial transactions.

Demand for innovation is there: According to the recently released 2022 Online Sales Study by Mexican Online Sales Association (AMVO), e-commerce in Mexico generated in 2021 a total of MX$401.3 billion (US$20 billion), representing a 27 percent increase compared to 2020. For the second consecutive year, the e-commerce market value saw a double-digit increase after the 81 percent gain in 2020. A recently released Consumer Dashboard by Deloitte found that one of the drivers that made Mexicans turn to the various e-commerce and delivery platforms was to take care of their health. According to the survey, women are more willing to spend on different services to take care of their health. These types of behavioral changes could take decades to develop without a once-in-a-lifetime shock like the pandemic.

Government and public sector support for innovation: In December 2018, the government of Mexico City created the Digital Agency for Public Innovation (ADIP) with work planned around three central axes: increasing public internet access by providing free Wi-Fi; developing digital tools for use by citizens to better hold their government accountable; and by creating digital instruments that allow the government to better serve citizens. Other local governments have innovation incentive projects, such as IDEA GTO, a project by Guanajuato’s state government in which local entrepreneurs, investors, academic institutions and NGOs are brought together to implement innovative ideas with the goal of bringing economic development to the local economy

Digital transformation was already an urgent business priority before the pandemic; now, it could be the difference between success and failure. A quick look suggests that Mexico is an early adopter in this transformational wave. With innovation being a priority across many industries in the Netherlands, proper ideas and proper financing could create opportunities for Dutch companies to seize the moment in Mexico.

In our recently approved Strategic Plan for 2022, Holland House Mexico has declared one of its priorities the tech and e-commerce sector. Whether it’s Adyen’s solutions for digital payments, Electude’s innovative e-learning platform high-level education or Routescanner’s digital platform for the logistics industry, our commitment is helping Dutch companies incorporate their tech innovations into the Mexican market.

This article was originally published by Mexico Business News (https://mexicobusiness.news/trade-and-investment/news/mexicos-post-covid-19-tech-and-innovation-boom).

Successful 2021 edition of the Dutch Pavilion at CMP

Opportunities for Dutch Businesses in the Mexican Automotive Industry 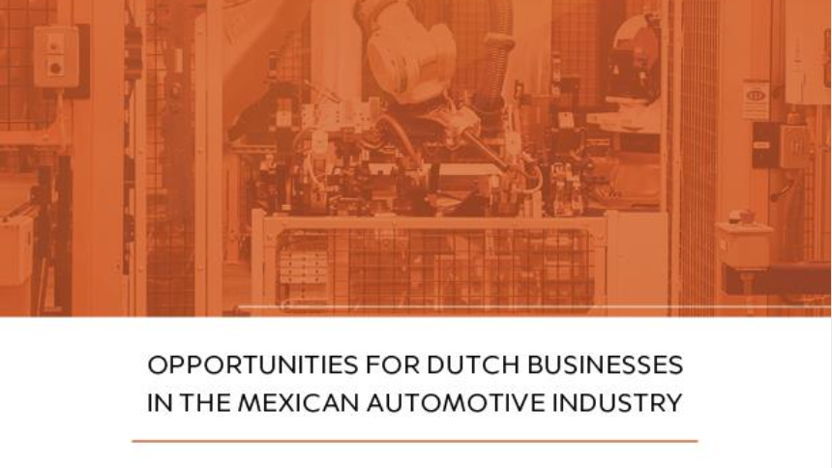 Opportunities for Dutch Businesses in the Mexican Automotive Industry