In July 2020 the diplomatic mission of Ambassador of The Netherlands to Mexico Margriet Leemhuis came to an end and she returned to The Netherlands to assume a new role in the Ministry of Foreign Affairs. In this interview with HHM, Leemhuis looks back on her experiences as ambassador in Mexico in terms of political and business success, and gives an outlook for Dutch companies doing business in Mexico.

A: What surprised me most about Mexico City is that although it is a very large city with 22 million inhabitants, there are many pleasant and green neighborhoods with a good quality of life. Mexico City’s traffic can be stressful, but in general it is a relaxed way of life and the people are very open and friendly. Mexico itself is fantastic. We travelled throughout the country, from Chihuahua in the north, to Oaxaca in the south, and witnessed the diverse culture, people and nature Mexico has to offer. It has been a privilege to represent my country here.

The main misconception about Mexico in The Netherlands is that Mexico is an extremely dangerous country. Although there is an awful amount of violence, the chances that you find yourself in a crossfire between two rivalling drug cartels are very slim. Of course, it is important to take precautions and be a bit more careful than you would be in Amsterdam, but in doing so you will be fine.

What I will miss most about Mexico is the wonderful food and walking my dog in the morning surrounded by beautiful palm trees and exotic plants.

Q: Looking back on your period in Mexico, could you give us some examples of successful cooperation between the Dutch and Mexican governments as well as in the business community?

Another success is that of the new USMCA agreement between Mexico, the US and Canada. This agreement also has impact on Dutch companies that produce in Mexico and export to the US. In a period of scepticism about free trade agreements, these two agreements are vital for The Netherlands, which has an open economy and therefore depends heavily on foreign trade.

Furthermore, it is important to have the right conditions for Dutch companies present in Mexico and then to adequately help these businesses. In that light, an important milestone was the opening of Netherlands Business Support Office (NBSO) in Queretaro. NBSO supports Dutch small and medium-sized enterprises to export to Mexico. Another success story is that of Holland House Mexico. The infrastructure of these two entities is needed to support Dutch companies new to the Mexican market. Doing business in Mexico is not easy and you need feet on the ground to overcome barriers caused by culture and for instance the time difference.

During my time as ambassador I have made it my personal objective and that of the embassy’s team to visit as many Dutch companies as possible. I am proud of the entrepreneurship of the Dutch and how they venture in new endeavours. For example, we visited Dutch orchid producer in Chiapas and the new Heineken brewery in Meoqui, which is a plant operated based on the principles of circular economy and produces its electricity from solar panels mounted on the roof. Other visits were made to, for example, Shell and the Vopak terminal in Altamira. On these visits Ambassador Leemhuis was usually accompanied by local authorities and governors, which helped Dutch companies to establish relations with local government.

Q: There have been notable political and economic shifts during your period as Ambassador. What is your outlook for Dutch companies in Mexico, short-term and long-term?

A: Mexico is a huge country, over five times the size of Germany. Mexico’s 120 million consumers represent significant purchasing power in the market and the North American country is part of the G20 as well as of the USMCA, making the country even more appealing. All in all, Mexico is a particularly important market; this will not change.

Despite Mexico being a powerhouse, there have been political and economic changes. As an embassy our role is to speak with the government about the impact of these changes. Even more important is the dialogue between the embassy and the European colleagues to Mexico, because as the European community we stand stronger.

It is important to respect the democratically elected government and their new policies. However, an open dialogue about the consequences is needed. Although Mexico’s current investment climate is a bit more difficult, the Latin American country remains an interesting destination for business, especially in the long-term. In the face of political developments, business to business activity will always continue to take place.

The embassy has had success in convincing the Mexican government to open the market to Dutch products. Over the past four years, the Mexican market has opened significantly to Dutch products such as pears, pork meat and veal. The flower sector is a particularly promising sector, although the industry is currently experiencing challenges to export flowers to the US. This is mainly caused by a gap in Mexican legislation concerning the protection of breeder’s rights. The embassy is in talks with the Mexican Ministry of Agriculture to show the opportunity and potential this sector has in exporting flowers to the US. Once solved, there is a bright future for flower exports to the US.

Q: What do you think will be the impact of the new EU-Mexico Free Trade Agreement on business between The Netherlands and Mexico?

A: The impact for Dutch companies will especially be in the agri-food sector. Tariffs will disappear and market access expended.

Another opportunity, especially in the COVID-19 era, is e-commerce. Although online commerce has been growing in both Mexico and The Netherlands, online trade between both countries is not as well developed and could prove an important sector. This new trade agreement creates the right climate for e-commerce and lifts barriers.

As said, this deal is much more than a trade agreement; it is a global agreement. Once a year Mexico and Europe get together to discuss developments and best practices concerning human rights, combating corruption and the Paris Agreement. The main objective of this dialogue is to learn from each other. The question remains if the EU-Mexico trade agreement makes it through the Dutch and all the European parliaments. Once signed, the free trade agreement is of benefit to both Europe and Mexico. Europe’s markets will become more accessible for Mexican products. The Netherlands is promoting the Port of Rotterdam to be the gateway to Europe and to handle this increase in products.

A: I admire HHM enormously, as it is difficult to set up such a new office. In its first year of operations, HHM has shown that it is possible to successfully start this type of organization and it has proven its relevance by offering services that companies need. For the embassy it is great to have a partner that can offer complementary services to what the embassy itself provides. The embassy assists companies new to the Mexican market with, for example, information and support. More extensive soft-landing services and local representation services are offered by HHM. Referring to the collaboration between the embassy, NBSO and HHM, Ambassador Leemhuis says: “I always like to call us Team Holland, one team working together towards the same goal of promoting sustainable trade and investment between The Netherlands and Mexico”.

What really helped the success of HHM was the experience of the Dutch Energy Association, which was an organization launched in 2016 and was dedicated to connecting Mexico and The Netherlands in the energy sector. With the arrival of HHM it made sense to incorporate the Dutch Energy Association into HHM and built on the experiences and lessons learned.

A: What advice would you give Dutch entrepreneurs interested in doing business in Mexico?

Invest in the relationship would be my first advice. The Dutch can be direct and sometimes people experience we are cold and even a bit aggressive. It is advisable to become a trusted partner. The only way to accomplish this is to earn trust by investing time: be genuinely interested in people, ask how they are and how their families are and take them out for lunch. HHM can also play a role in the concept of trusted partners. For example, Dutch companies can be represented through HHM whilst these companies are not in Mexico.

Furthermore, the importance of the ‘4Ps’ – patience, place, perseverance and people – cannot be overstated in Mexico. Patience is needed because decision making in Mexico in some cases tends to take longer than in The Netherlands. Place is important because it is needed to ‘show your face’ and be present in Mexico. When something does not go according to plan, remain persistent and try different ways to reach your goal. Finally, people are of course key in reaching success. 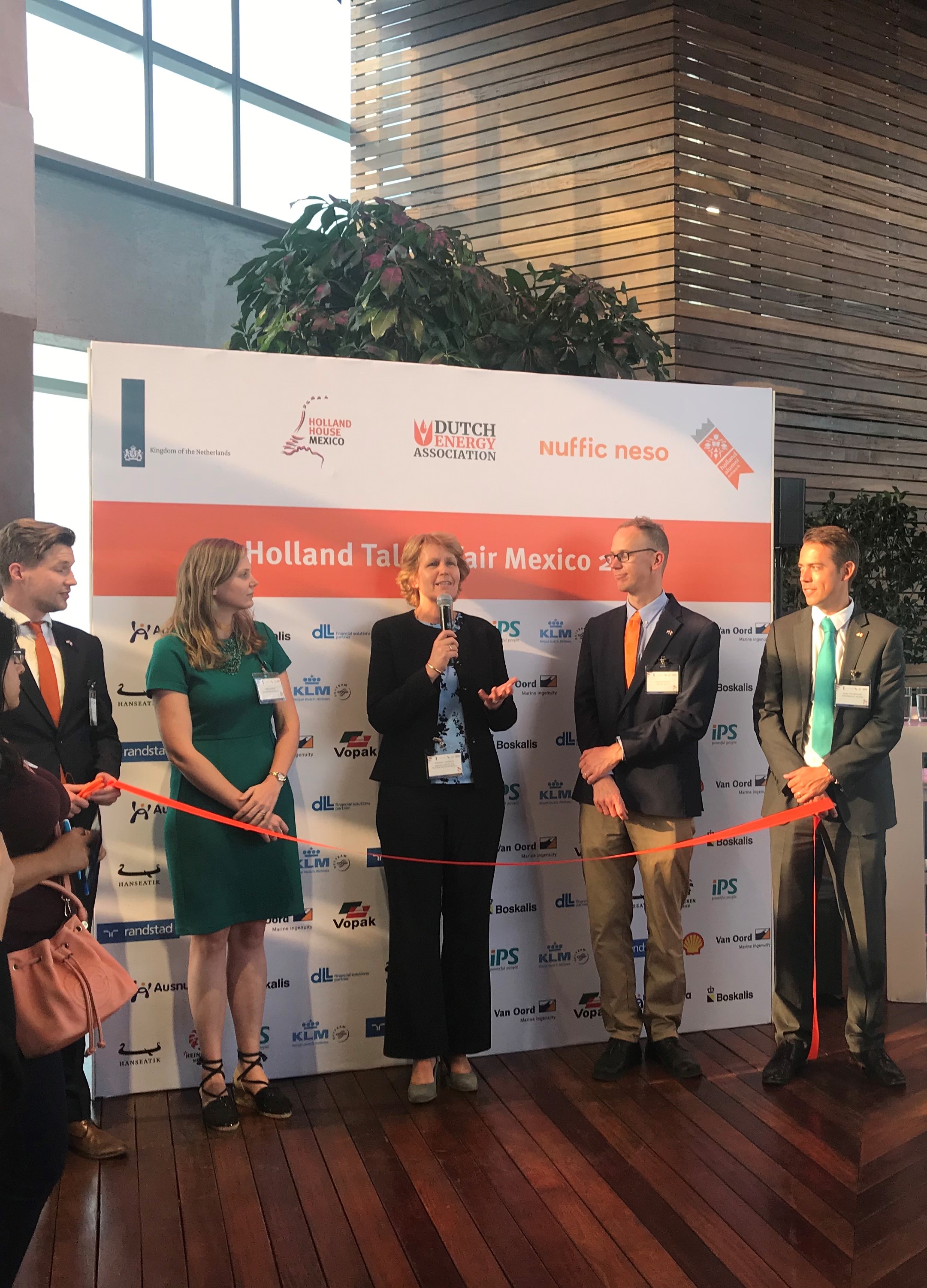